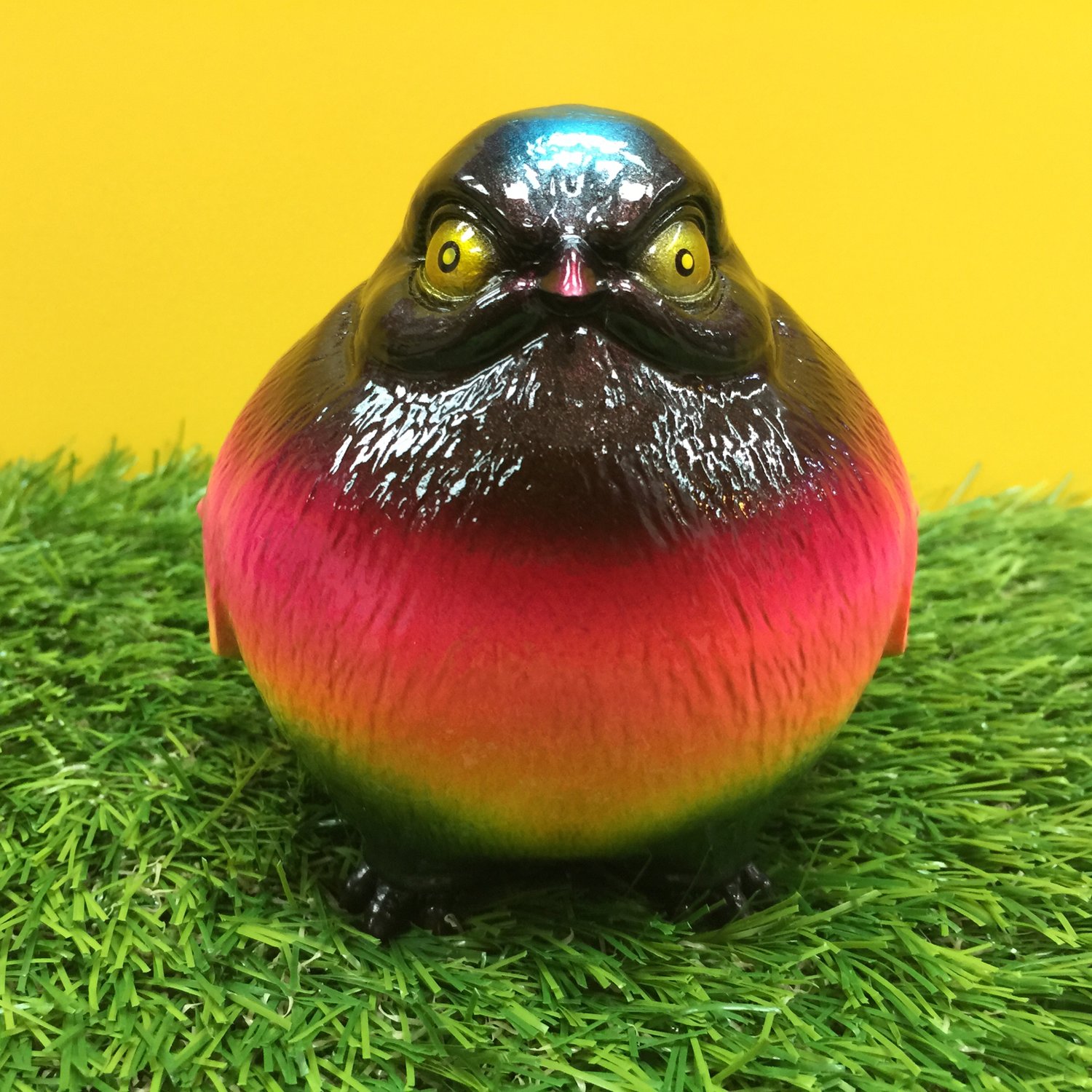 Pitohui is JEM’s companion. Although he may look tough and punk, pitohui is actually very sensitive and shy. Pitohui has dreams to be a crime fighter hence the CAT skull mask, but for now, Pitohui enjoys the wonderful adventures with JEM. Fun Fact: The hooded pitohui is a pitohui of New Guinea with black and orange plumage. It is one of the few known poisonous birds.

The resin bird stands at about 4.5"/11cm and the skull mask is removable.
Edition Size: 6

Bio: Ask anyone who knows Mark to describe him and the two things that will come up are Toys and Art.

After attending the Academy of Art College in San Francisco during the late 80's and picking up a New York artist's rep, Mark embarked on a 10-year plus journey as a freelance commercial illustrator. Over the years he's worked with a diverse client list which has included Scholastic Books, Bantam Books, Harper Collins, Becketts Publications, Schlage Locks, Genentech, IBM, Square Soft, DC Comics, Sony, Galoob Toys, Lucasfilms, Hasbro Toys and numerous Advertising and  Design firms nationally and internationally. The highlight of this time included over 40 cover paintings for RL Stine's Goosbumps book series, Give Yourself Goosbumps.

Churning out hundreds of assignments over the years, coupled with deadlines from hell took a toll, both mentally and physically. "I had to reassess what was important in my life and refocus my abilities towards a new goal. " said Nagata. "I'd been collecting Japanese toys all along, and suddenly realized it would be cool to have a magazine of some type devoted to them. So it's no surprise that Mark ended up creating and co-publishing Super7 Magazine. After successfully building the Super7 brand for nearly 4 years , it was time to move on."I wasn't able to paint as much as I wanted, and I realized that the part of Super7 I enjoyed the most was creating toys and artwork " reflects Nagata.

Thus was born Mark's venture called Max Toy Company, named after his son Max. With a nod to the Golden Age of Japanese toys, Max Toy Co. will continue the tradition of offering classic Japanese character toys. Max Toy Co. produces its own exclusive toys, both licensed and original. Many of the original toys offered are hand painted by Mark Nagata. A tradition that goes back to Japanese toy makers. Also most of the offerings feature unique artwork on the headercards painted by Mark.

In September 2007 the first group Kaiju show in the United States featuring artists from Japan, USA and South America was held at Rotofugi Gallery in Chicago. Called Toy Karma ( www.toykarma.com ) it was a historic gathering that featured many custom painted toys and art.
Following on the heels of this event in October 2007, over 30 of Mark's original paintings, toys and a selection of his vintage toy collection were featured in Beyond Ultraman: Seven Artists Explore the Vinyl Frontier, at the Pasadena Museum of California Art , a joint exhibition with LaTda , Los Angeles Toy, Doll & Amusements Museum. This marked the first time in a musuem setting that the influence of Japanese toys on California artists was explored. And in 2007 Mark appears on the first volume of the ToyPunks DVD and the Toys R US DVD.

In 2008 Mark sold his hand painted custom Kaiju toys via the prestigous auction houses Philips De Pury and Christies in New York and London. Mark's customs sold in each auction and continue to spread the Kaiju art toy movement into new uncharted areas of the art world.
And in 2009, Mark curated Mark Nagata and Kaiju Comrades art show in Tokyo, Japan, once again bring together artists from different aspects of the kaiju toy movement in this first of it's kind art toy show. Max Toys such as Kaiju Eyezon appeared in the number one song and video "FireFlies" by Owl City in 2009. Toy Karma 2 was held once again at Rotofugi Gallery in Chicago to great success.

All prices are in USD.
Price does not include registered shipping:
Singapore $10
Rest of World $25